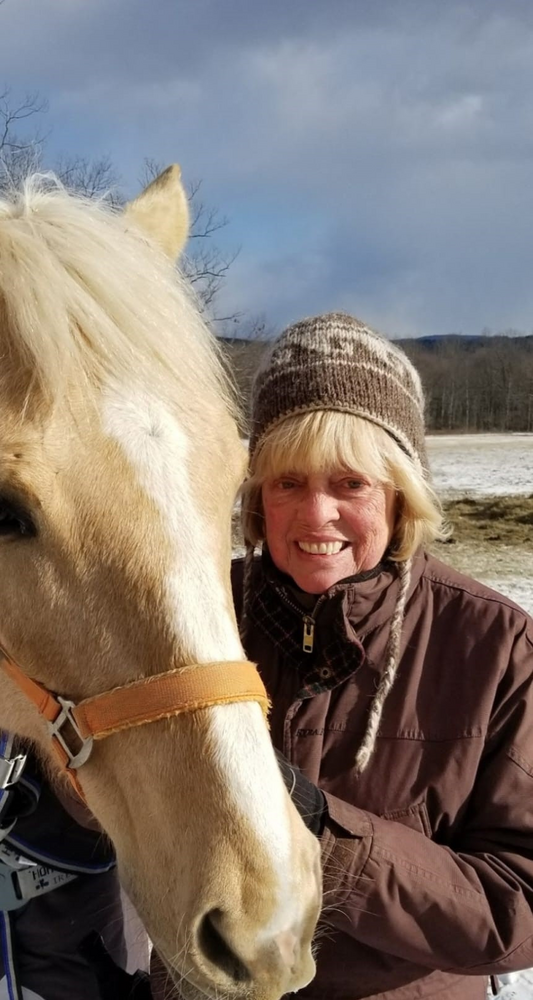 Please share a memory of Sydney to include in a keepsake book for family and friends.
View Tribute Book
Sydney M. Davis, cherished wife, mother, grandmother, aunt, enthusiastic horsewoman and valued friend, died at Lourdes Hospital in Binghamton on September 21. Syd died after a courageous year-long battle against multiple chronic health conditions, complications and very long odds. She was 78 years old and the bravest person her family has ever known. Syd lived in the Town of Binghamton with her husband Jeff and their devoted Labrador retriever Ty (aka Nurse Ty), who ranked Mom as human #1 and saw her as the always reliable source of treats on demand. Syd Davis was funny, outgoing and friendly. She loved horses and dogs and was attracted to stray critters in all shapes and sizes. Syd wasn't inclined to keep people at arm's length. She had a wonderful sense of humor and a sharp wit that, when called upon, could deflate overblown egos with a gentle jab and a warm smile. She also was a determined dressage rider who, at 77, was still training with her horse Kat just a few days before lengthy emergency surgery in September 2021altered her riding plans. Although Syd was no longer able to ride after her surgery, she stayed connected to the horse world and visited Kat and her human friends at Unity Stables on the top of Mill Street in Binghamton whenever she could. In 2015, Syd was presented The Century Club plaque "in recognition of her dedication to her horse and the sport of riding." At a combined age topping 100, Syd and her longtime horse Lincoln completed a dressage test on the way to earning Century Club recognition. That accomplishment is one indication of her commitment to riding, the horse world, dressage and horse people. The expansive number of horse people who call Syd friend is an even more significant measure of that commitment. Unity Stables was Syd's world and its people formed her community. She loved the horses and the people and they love Syd – and that relationship brings a great deal of comfort to Syd's family at this time of loss. Syd and Jeff were married while they were in college in 1966 and remained partners for life. Through good times and not-so-good, the whole of their marriage always was far greater than the sum of its parts. Syd loved her family completely and was immensely proud of her sons and three grandchildren, who always called her Gram. Syd is predeceased by her son, Peter C. Davis; parents, Fletcher and Betty (Clark) Munger; in-laws, Kimball and Patricia Davis, and her sister in-law, Christina (Prew) Davis. Survivors include her husband, Jeffery K. Davis; son, Stephen K. Davis, and daughter in-law, Abena Koomson-Davis, Stamford, CT; grandchildren, Anthony (New York City), Angelina and Nicholas Davis; and sister out-law, Mary DiPaola (all of West Hartford, CT); brother in-law, Jonathan K. (Roxanne Lelik) Davis, Saratoga Springs, NY; nephew, Jonathan K. Davis Jr., Minneapolis, MN; niece, Stephanie K. Davis, and her husband Rayan Aguam, Saratoga Springs, NY. The family is grateful to the many doctors, nurses, aides, technicians and staff at Lourdes, Broome Oncology, United Health Services and Good Shepherd Village Endwell who worked very hard to give Syd a fighting chance to get back on her horse. There will be no calling hours. The family will say goodbye to Syd privately and celebrate her life and memory with family and friends at a later date. In lieu of flowers, those who wish to do so are asked to make a contribution to the Broome County Humane Society, 167 Conklin Ave., Binghamton, NY 13903, or the Lourdes Hospital Foundation, 169 Riverside Drive Binghamton, NY 13905.

Share Your Memory of
Sydney
Upload Your Memory View All Memories
Be the first to upload a memory!
Share A Memory
Plant a Tree