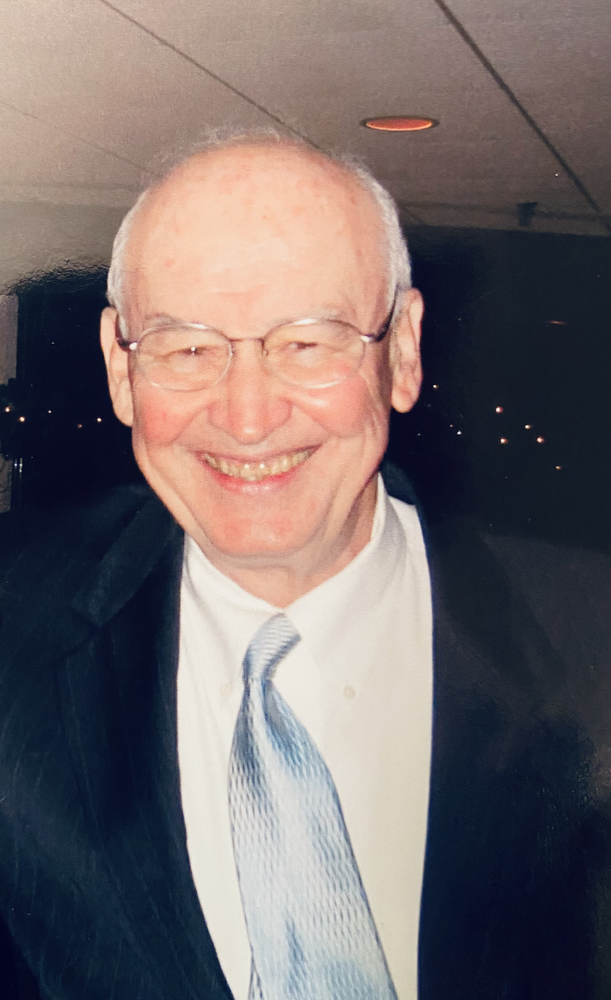 Please share a memory of John to include in a keepsake book for family and friends.
View Tribute Book
John William Young, 88, of Binghamton, New York passed away peacefully on February 10, 2022. surrounded by his loving family. John was predeceased by with his wife, Joan Hester Young, his parents, John Alley Young and Margaret Bulger, brother James Edward Young, sister-in-law Janice Phillips Young, and brother-in- law Honorable Joseph P. Hester Jr. John is survived by the family he so deeply loved and cherished; his children and their spouses, Honorable Mark H. Young and Dawn Fidler Young, Meghan and Kiernan Crowley and Mara and Honorable Chris Grace; and the light of his life his eight grandchildren; Jaime and Reagan Young, Conlon, Ronan, Brody and Alley Crowley, and Finnegan and Declan Grace. He is also survived by his sister-in-law Suzanne Fischer Hester, sister-and brother in-law Marilyn and Bob Ridgley and many beloved cousins, nieces and nephews their families, his cherished friends, Joseph Garbarino and Marty Kennedy and his dog Murphy. John was born on July 28, 1933 in Binghamton, New York. He was raised in a loving and close-knit family. He graduated from Binghamton North High School in 1951 where he developed many lifelong friendships. He went on to earn a B.S. in Physics and Mathematics from LeMoyne College in 1958 where he played basketball. While in college John was drafted and went into the United States Army during the Korean War; he was in the Army General School for Counter Intelligence and worked as a PFC in Military Intelligence unit outside of Frankfurt, Germany and played on the basketball team. After college John worked at Singer Link- as an Electrical Engineer in Florida. He then moved to Washington D.C where he worked and graduated from the Georgetown University Law Center in 1962. After graduation from law school John moved back to Binghamton and practiced law for over 50 years. He worked as an Associate Attorney at Cherin & Gold until he started his own law firm. John was the former Broome County Democratic Chairman, a member of St. Patrick's Church, Binghamton Country Club, Broome County Bar Association, New York State Bar Association, Binghamton YMCA, Loyal Order of the Moose, Turtle Creek Country Club and various civic organizations. John was a devoted and loving father, grandfather and friend. He was proud of each and every member of his family whom he loved unconditionally. John was a passionate sports enthusiast and loved golfing. He was fortunate to have three hole-in- ones over the years at the Binghamton Country Club. He was a devoted fan of his children and grandchildren's athletic and academic events and counted them among his fondest memories. He would travel far and wide to support his children and would always try to make it to the local fields or courts to cheer on his grandchildren's sporting endeavors. He loved making sports bets with all of the grandkids and playing card games with them. Over the years John spent his time at the family cottage on Oquaga Lake where he enjoyed boating, swimming and hosting annual clambakes and gatherings. John spent several years in Jupiter, Florida with treasured friends where he golfed, played bridge and had dinner with his friends. John was loved by many. He will be missed but will be forever in our hearts. John will be remembered by his children and his grandchildren as a warm kindhearted gentleman, who adored them and loved spending time with them. His family will cherish every moment we were blessed to have him with us. The family would especially like to thank his caregivers who became a part of the family, Angel Beebe. Kristen Beach and everyone at Angel's Helping Hands. Thank you for your help, friendship and support. Also, a special thank you to Dr. Jagraj S. Rai for his dedication, attention, and wonderful care of John over the years. A Funeral Mass will be offered at St. Patrick's Church, corner of Oak and Leroy Streets. Binghamton, Wednesday, February 16, 2022 at 11 a.m. Burial will be in Calvary Cemetery, Johnson City. The family will receive friends at the J.A. McCormack Sons Funeral Home, 141 Main Street, Binghamton, Tuesday, February 15, 2022 from 4 to 7 p.m. The Mass will be livestreamed at tinyurl.com/12w5eun or by going to https://sta-sp.org/.
Tuesday
15
February