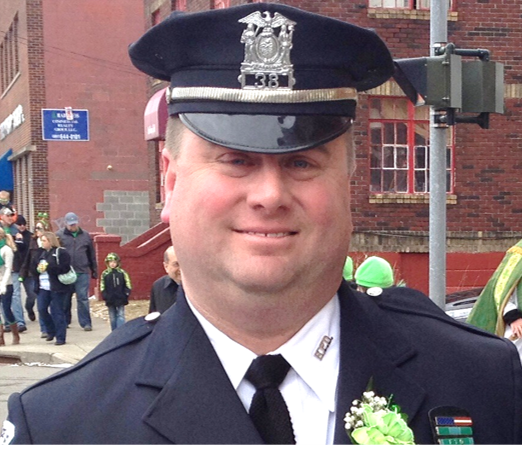 Please share a memory of Bryan to include in a keepsake book for family and friends.
View Tribute Book
Bryan James McMahon of Endwell, NY, died November 3, 2021. His spirit lives on in those who loved him. Bryan was born on April 25, 1972, to Francis J. (Frank) McMahon and Bridget (Breda) Mannix McMahon, in Kingston, NY. He was a graduate of John A. Coleman Catholic High School and Ulster County Community College, now SUNY Ulster. He served the community in and around Binghamton, NY as a police officer and volunteer fire fighter. Most recently, he worked in Security for Allied Universal Security Services at the Lockheed Martin facility in Owego, NY. Bryan was fiercely proud of his Irish heritage. He traveled to Ireland multiple times, including introducing his friends to the Emerald Isle, and was a member of the Ancient Order of Hibernians (Monsignor Lawrence E. Giblin Division One, Broome County, NY). He was the flag bearer in the Binghamton St. Patrick's Day parade several times and the official parade starter in 2013. Bryan is survived by his sister, Maureen McMahon Johnson, his brother, Kevin McMahon, his nephew, Brendan, and Brendan's fiancée, Emily. He is also survived by his aunt Nora, and cousins Jim (and wife Denise), Dee, Jerry, Hawley, and Joseph, all of Tralee, County Kerry, Ireland, as well as extended family on both sides of "the pond." He was predeceased by his parents, his brother-in-law, Red Johnson, his uncle Tony, and his aunt and uncle Maura and Mike. Funeral Services will be held at the J.A. McCormack Sons Funeral Home, 141 Main Street, Binghamton, Saturday, November 13, 2021 at 11 a.m. Rev. Laurence J. Lord will officiate. Burial will be in St. Mary's Cemetery, Kingston at the convenience of the family. The family will receive friends at the McCormack Funeral Home, Saturday from 9 a.m. until 11 a.m. Memorial contributions may be made to the Hudson River Maritime Museum, https://www.hrmm.org/give.html or 50 Rondout Landing, Kingston, NY 12401. Bryan's Dad was a volunteer and docent there, and Bryan's Mom, as a teacher for over 50 years, was appreciative of their educational programs. Ar dheis Dé go raibh a anam (May his soul be on the right hand of God). The service will be livestreamed on the J.A. McCormack Sons Funeral Home Youtube channel.
Saturday
13
November

Share Your Memory of
Bryan
Upload Your Memory View All Memories
Be the first to upload a memory!
Share A Memory
Send Flowers
Plant a Tree