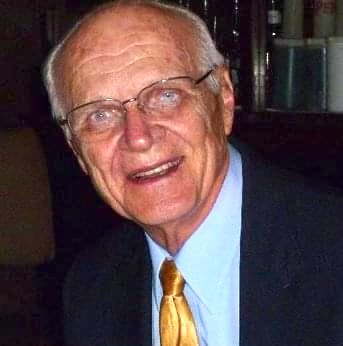 Please share a memory of Robert to include in a keepsake book for family and friends.
View Tribute Book
Robert David Barno passed away peacefully on October 29, 2022 at the age of 91, 6 months after losing his beloved wife of 65 years, June Barno. Our family was blessed to be with him in his final days. In addition to his wife, Bob was predeceased by his siblings Joan Gibson, Gene Barno, and Bill Barno, and Stephen and Joan Del Vecchio. He is survived by daughters Leslie Dean (Joe), Kathleen Buglione (Ray), Susan Ward (Mike), and Nancy Barno Reynolds (Dan), 15 grandchildren: Lauren, Alyson, Emily, Dana, Brendan, Bobby, Brian, Cameron, Collin, Erica, Sean, Martin, Meg, Eamon, and Cate, as well as 20 great grandchildren. He is also survived by his in-laws Robert Gibson, Madeline Barno, and Mary Barno, as well as his best friend of 63 years, Tom Toton. After receiving his BA from Harpur College, Bob enlisted in the US Marine Corps, serving in both the 3rd Marine Division (Japan) and the 1st Marine Division (Korea). He later earned his Master's Degree from Albany Teachers College, where he met June. He then taught Social Studies for 33 years, mostly at his Alma Mater, UE High School. He was a founding member of St. Vincent de Paul Parish, a former CCD instructor, and served as an usher for more than 25 years. He enjoyed poker with his 'Poker Pals' and breakfast with his teacher friends. Our family expresses sincere gratitude for the loving care provided to our parents this year by Camille, Chris and Bonnie whose constant presence was a source of comfort to us all. Many thanks to the entire staff of Seton 2 and the Palliative Care Team at Lourdes Hospital for their steady counsel and support. A Funeral Mass will be offered at St. Vincent de Paul Blessed Sacrament Church, Clubhouse Road, Vestal, Thursday, November 3, 2022 at 11:30 a.m. Burial will be in Vestal Hills Memorial Park. The family will receive friends at St. Vincent de Paul Blessed Sacrament Church, Thursday from 10 a.m. until 11:15 a.m. Expressions of sympathy in Bob's memory may be made to Lourdes Hospital Foundation, Attention: Lourdes Palliative Geriatric Services, 169 Riverside Drive, Binghamton, NY 13905 or to St. Vincent de Paul Blessed Sacrament Church, 165 Clifton Boulevard, Vestal, NY 13850.
Thursday
3
November

Share Your Memory of
Robert
Upload Your Memory View All Memories
Be the first to upload a memory!
Share A Memory
Send Flowers
Plant a Tree