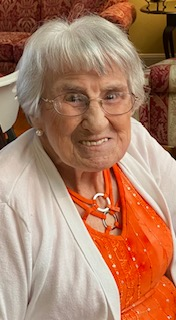 Please share a memory of Mary to include in a keepsake book for family and friends.
View Tribute Book
Mary Emery Furch Young, 97 went to be with the Lord, Thursday, May 12, 2022 in Binghamton, NY. She was born in Evansville, WI July 14, 1924 to George and Ethel (Paul) Emery. She graduated from Roscoe High School, where she was involved in 4H club, also working at the Beaverkill Trout Club. She graduated from BGH School of Nursing in 1945. It was during her senior year she met the love of her life, Francis E. Furch. They were married in Dothan AL May 17, 1944. Following the wedding, she returned to her schooling. During this time, she served in the Nurses Corp. Fran returned to graduate from the Army Air Corp in 1944. It was noted in Fran's last journal entry; he received his "wings" and married the student nurse, where they resided in Binghamton. Mary worked her entire nursing career and retired from Binghamton General Hospital in 1980. She was known as the neighborhood nurse and cared for many friends and family. She took in "Fresh Air" children, was a Den mother, Sunday School teacher, Awana leader and sang in the church choir. When Fran opened the South Side Bicycle Shop, she also worked alongside of him. In 1977, after 33 years of marriage, her beloved Fran went home to be with the Lord. In 1982, she met and married James L. Young. They moved to Bradenton, FL. Jim and Mary traveled extensively, and she was the historian of their retirement community. In 2015, Jim was called to his heavenly home. They were also married 33 years. She continued to live in Bradenton, FL until 2021 and moved back to Binghamton NY to be closer to her family. Survivors include, children, Bill (Lynne) Furch, Page Lake, PA, Jim Furch, Binghamton NY, George (Carlene) Furch, Candor NY, Dale (Angela) Furch, Apalachin NY, Carol (Jay) Walden, Upland CA, Francis Furch Jr, Macedon NY, Grandchildren, Greg (Nicole) Furch, Cheri (John) Harris, Julie (Joe) Callahan, Andrea Coultas, Jason (Laurie) Furch, Kristin Furch, Lauren (Cory) Thomas, Michael Furch, Bethany Walden, Caleb Walden, Robert Furch, 9 Great grandchildren. Jim's children, Joyce Young, Elyria OH, and her son-in-law Ernest (Sue) Rebstock, Wyalusing PA. Step Grandchildren Heidi (Mark) Birtwistle, Erik (Linda) Rebstock, Joely (Mike) Wilkinson, Drew (Joanne) Illner, 7 step great grandchildren. She was pre-deceased by her first husband, Francis Furch, second husband, James Young, stepdaughter, Darlene Rebstock, daughter in law Susan Furch, brother and sister in law, Fredrick and Elinor Emery, sister and brother in law Paulene and Carl Gray. "I have fought the good fight, I have finished the race, I have remained faithful." 2 Timothy 4:7. Funeral Services will be held at the J.A. McCormack Sons Funeral Home, 141 Main Street, Binghamton, Thursday, May 19, 2022 at 1 p.m. Pastor Jay Walden, her son-in-law will officiate. Burial will be Vestal Hills Memorial Park. The family will receive friends at the McCormack Funeral Home, Thursday from 11 a.m. until 1 p.m. In lieu of flowers, expressions of sympathy in Mary's memory may be made to the Retired Professionial Fire Fighters Cancer Fund, 4 Loretta Drive, Binghamton, NY 13905 or www.letsfirecancer.org.
Thursday
19
May

Share Your Memory of
Mary
Upload Your Memory View All Memories
Be the first to upload a memory!
Share A Memory
Send Flowers
Plant a Tree