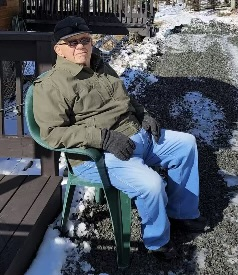 Please share a memory of William to include in a keepsake book for family and friends.
View Tribute Book
William Leon Parisot, 85, of Clifford Township, PA and formerly of Johnson City, NY passed away at home surrounded by his family on Monday April 4, 2022 after a battle with cancer. Bill was born in South Abington, PA on November 6, 1936 to the late Leon and Mildred Parisot. He is survived by his loving wife and soulmate of 54 years, Irene; his son Bill and wife, Danielle; daughter, Ann Marie and her husband Ron Lukovich; daughter Laurie and her husband Mike Homisak; daughter Patty and her husband Ben Cid; his grandchildren, Gabrielle, Alexis, Ben, Logan, Oliver, Jack, Molly and Morgan; his brother Tom and sisters, Alice Woodruff and Sharon Mitchell; many, many nieces and nephews who were like his children; his brothers-in-law, Ken, Doug, Bill and John Kozel. He was also predeceased by his sisters Marge Staley, Ann Smith, Aline Leary, Shirl Foland and Carole Broderick; and his mother and father in-law, Frank and Anne Kozel . Bill graduated from N. Syracuse Central High School in 1955. He served in the U.S. Army from 1959-1961 and did a tour in Korea. He received an honorable discharge due to medical issues. Bill trained to become a Master Electrician at Moore Electric becoming a lifetime member of IBEW 325. After a head injury in December 1987, Bill spent his years surrounded by his family and living life to the fullest. Bill was an avid hunter, fisherman, camping engineer, barbershop singer and railroad enthusiast. Bill's greatest accomplishment was his family. His positivity, acceptance, encouragement and friendship were extended to all who crossed his path. His magical power was his healing hugs. The Parisot family would like to thank our family and friends for their unwavering love and support throughout Bill's illness; Sacred Heart Hospice and his many doctors and nurses that cared for him throughout the years. Bill's family will be holding a Celebration of Life at the Relief Pitcher, 197 Conklin Avenue, Binghamton, NY from 5-9 p.m. on Friday, April 8, 2022. All family, friends and acquaintances are welcome. Funeral Services will be held at the J.A. McCormack Sons Funeral Home, 141 Main Street, Binghamton, Saturday, April 9, 2022 at 12 noon. Rev. Donald Bourgeois will officiate. Burial will be in Chenango Valley Cemetery, Hillcrest, NY. The family will receive friends at the McCormack Funeral Home, Saturday from10 a.m. until 12 noon. In lieu of flowers, those wishing to pay tribute in memory of Bill, please give a healing hug to someone in need or make a contribution to Sacred Heart Hospice, 100 Williams Street, Dunmore, PA 18510.
Friday
8
April

Share Your Memory of
William
Upload Your Memory View All Memories
Be the first to upload a memory!
Share A Memory
Send Flowers
Plant a Tree