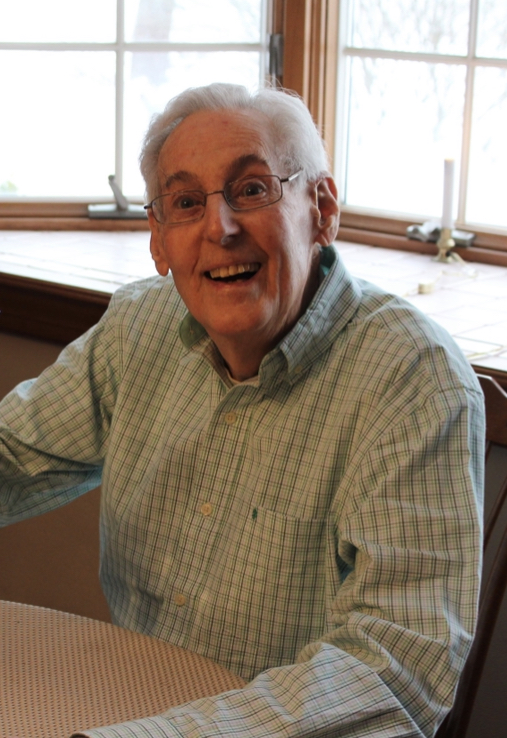 Please share a memory of John to include in a keepsake book for family and friends.
View Tribute Book
John J. (Jack) O'Rourke March 18, 1926- December 6, 2021 John (Jack) O'Rourke, dearly beloved husband, father, grandfather, brother, uncle, friend to all, died peacefully at the age of 95. He was predeceased by his wife of 46 years, Mary Kelly O'Rourke in January of 2004, his parents John and Dorothy O'Rourke, two sisters and a brother-in-law Mildred O'Rourke, and Eleanor and Thomas Murray. He is survived by his four children and their spouses: John and Kathleen O'Rourke; Patricia and Michael King; Timothy and Roseanne O'Rourke; and Ann and Mark Saroka; 11 grandchildren: Sean (Rachel Jacobi), Kaitlin, and Thomas O'Rourke; Ryan (Megan) King and Bridget (Matt) McClelland; Molly, Tiernan and Aidan O'Rourke; Kelly, Patrick, and Daniel Saroka; one great-grand daughter, Mary Clare McClelland; and eight nieces and nephews and their families. He was a longstanding member of St. Patrick's Church, Binghamton, where he served as a Eucharistic minister, parish council member, usher, and a member of several parish programs for many years. He was a World War II veteran of the US Navy, a member of the Ancient Order of Hibernians, and a member of the Notre Dame Club of the Triple Cities. He was a proud graduate of the Class of 1949 of the University of Notre Dame and received his Master's Degree from Syracuse University School of Social work, a member of the school's first graduating class. He was employed by Catholic Charities of the Roman Catholic Diocese of Syracuse for 37 years as a Social Worker, Administrative Supervisor, his last 22 years serving as the Executive Director of Catholic Social Services. Throughout his life he enjoyed numerous trips with his wife Mary including Hawaii, California, Denver, New Orleans, Houston, Canada, and New England. Following the death of his wife he later enjoyed a special trip with each of his children: Alaska with Patty, Italy with Ann, Ireland with Tim, and a cruise on the Rhine River with John. He even went skydiving for the first time at the age of 85! A Funeral Mass will be offered at St. Patrick's Church, corner of Oak and Leroy Streets, Binghamton Friday, December 10, 2021 at 1 p.m. Burial will be on Saturday in Calvary Cemetery, Waterbury, Connecticut. The family will receive friends at the J.A. McCormack Sons Funeral Home, 141 Main Street, Binghamton, Thursday from 4 to 6 p.m. In lieu of flowers, contributions may be made to Emergency Financial Assistance with Catholic Charities, 232 Main Street, Binghamton, NY 13905, or to the charity of your choice. The Mass will be livestreamed at tinyurl.com/12w5eun.
Thursday
9
December