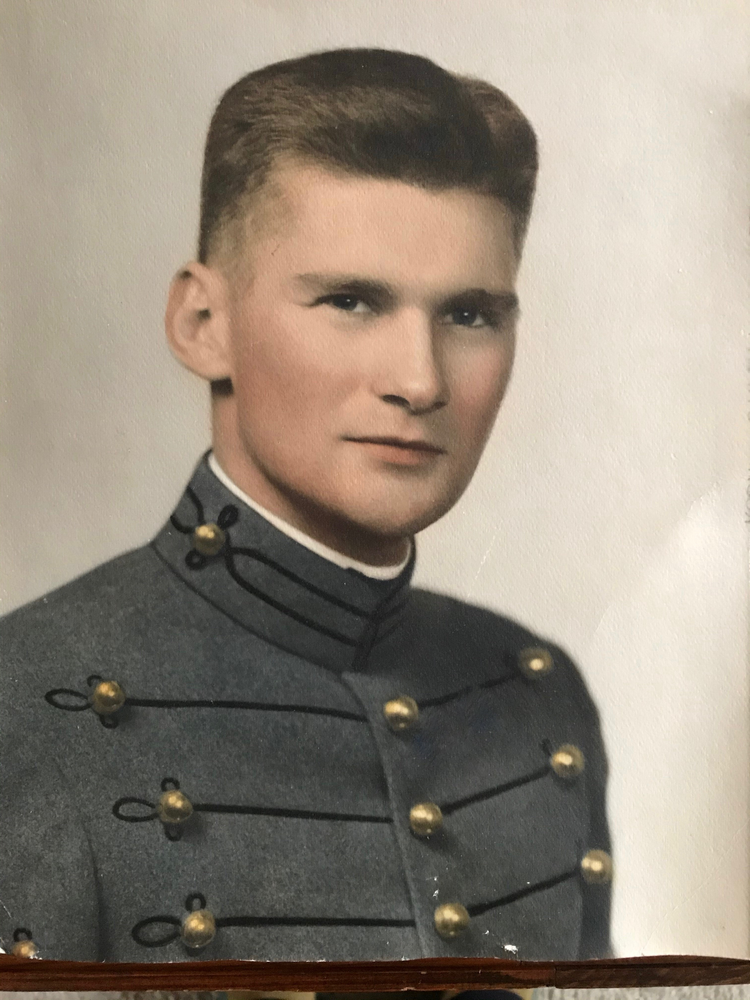 Please share a memory of Edward to include in a keepsake book for family and friends.
View Tribute Book
Edward Francis Rhodes, 89, born on September 29, 1932 of Binghamton New York, passed peacefully in his home, to be with Our Lord and reunite with his daughter, 7 month old Elizabeth Brodie Rhodes on Monday, November 1st, 2021. He is the son of Edward Charles Rhodes and Elizabeth Marie Rhodes (nee Wacks), brother John "Jack" Rhodes and sister Rita Rhodes. He adored his family, especially his brother Jack whom he idolized. Ed was married to Kathlyne "Kathy" Rhodes (nee Brockman) who he met early in his military career. Together they had 7 beautiful children. From oldest to youngest: Kathryn "Kelly" Smith Rhodes Jensen (Gregg, Megan, Rachael, Grant), Timothy "Tim" Edward Rhodes (Elizabeth, Nichole, Caitlyn), Elizabeth Brodie Rhodes (deceased), Sean Patrick Rhodes (Dakota, Amanda), Kevin O'Brien Rhodes (Andrea, Summer, Kevin Jr. "KJ", Thomas "Tommy"), Courtney Brigid Rhodes Kiel (Kevin, Krystal), Regan Sarah Rhodes (Angela "Angie", Ella, River). Ed has a total of 14 grandchildren and 10 great grandchildren, many cousins, nephews and nieces. Ed loved his children so effortlessly. He loved his whole family and would do anything for them. Ed was born at 185 Vestal Ave next to his grandfather's salon, the famous Wacks Hotel. Back in 1940 they added a 1000 to all addresses on Vestal Ave so his new address became 1185 Vestal Ave. Ed's grandfather, Peter Francis Wacks, purchased the Wacks Hotel in late 1919 just before the prohibition started in January of 1920, and ended in December of 1933. He served alcohol during those 14 years and he was only closed down and fined one time by the Feds (Federal Government). Peter Wacks' liquor came from Canada and he stored it in basement of the house Ed grew up in. During those 14 years his grandfather made enough money to send his two sons to Notre Dame, then law school and then the FBI. From bootlegging with 2 sons employed by the FBI tells a lot about the way of life through prohibition. Ed also had amazing childhood memories growing up on Quaker Lake, PA where his grandfather built their cabin. Ed graduated from Binghamton Central (now High School) in 1950. His continued education was at Harpur College (now Binghamton University), then St. Bonaventure University and then to West Point Military Academy by appointment only (Congressman). He graduated West Point in 1956. Ed's military assignments took him all over the world. Mostly in Germany and 2 tours in Vietnam. 4 of his children were born in Germany and 3 in the United States during his 28-year dedicated career in the military serving his country that he loved so much. He retired in June of 1984 and moved back to Binghamton, NY and became a successful Realtor with Coldwell Banker from 1984 to 2012, retiring for a second time at the age of 79 years 10 months. Ed was a season ticket holder to both West Point Army football and St. Bonaventure basketball games, where his oldest child Kelly graduated from, for over 3 decades. He worked with and sponsored a high school basketball team every year for the Stop DWI Basketball Tournaments at the Binghamton Arena for about 2 decades. Ed loved his sports. His favorite teams were: St. Bonaventure basketball, Notre Dame football, West Point football, San Francisco Giants baseball and Buffalo Bills football. After Pope John Paul the 2nd became pope in 1979 his first visit out of Rome was to his hometown in Poland, because he determined that the most important day in his life was his baptism. Ed was very close to his faith. Just like Pope John Paul, Ed felt the same way and celebrated all his children, grandchildren and great grandchildren's baptisms every year equally to their birth dates. A Funeral Mass will be offered at the Church of Saints John and Andrew, Vestal Avenue, Binghamton, Monday, November 15, 2021 at 11 a.m. Burial will be West Point Cemetery, West Point, NY. The family will receive friends at the Church of Saints John and Andrew, Monday, November 15th from 10 a.m. until 11 a.m. In lieu of flowers, expressions of sympathy in Ed's memory may be made to the American Heart Association.
Monday
15
November