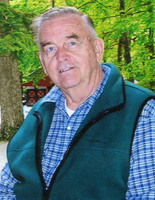 John Victor Joseph Cizauskas, 93, of Binghamton, died Wednesday November 9, 2022 at Our Lady of Lourdes Hospital. He was predeceased by his wife Agnes Jean (Moffitt) Cizauskas, his parents Victor and Mame Cizauskas, his father-in-law William James Moffitt, his brother-in-law William Paul Moffitt and his son-in-law, Timothy R. Dickerson. He is survived by his daughters, Rosemary Dickerson and Maureen Myrick (James Armstrong); his son John F. Cizauskas; his grandchildren: Leigh (Marc) Rivet, Patrick (Sarah) Dickerson and Kimberly (Brett) Durfee; his great grandchildren: Rosemary Rivet, Anthony Rivet, Cameron Dickerson, Taylor Dickerson, Ryan Dickerson, Mason Durfee and Austin Durfee. He is also survived by his brother-in-law, James Moffitt and many nieces and nephews. He was a 1947 graduate of Binghamton North High. He started a career with NYSEG at the age of 18 and retired in 1988 after 40 years of service. His retired early to take care of his wife Jean after she became ill and remained dedicated to her until her passing in 2001. He was a U.S. Army veteran of the Korean War, 5th RCT. He was extremely proud of his service and attended many 5th RCT reunions. Dad was a loving and devoted husband. As a father there could not have been a more stable, compassionate and giving person. As a Grandfather and Great Grandfather he was an unbelievable example of generosity in time, knowledge and love. You could see how proud he was of all of us. He would actually giggle when we were together. A lovely sound that we will all miss. He enjoyed family gatherings, summers at Oquaga Lake, his Lithuanian heritage, MAC STAC Apple Club, the Binghamton Adirondack Club work parties, his motorcycles and anything Ford, IBEW Union work, working at Mountain Top Grove, Snoopy and conversations that were always about listening and learning with great patience. He was a member of the Knights of Lithuania, American Legion Post 1645, VFW Post 478 and the NYSEG Quarter Century Club. The family would like to thank the staff at Good Shepherd Fairview Home for their patience and caring during Dad's stay. Funeral Services will be held at the J.A. McCormack Sons Funeral Home, 141 Main Street, Binghamton, Tuesday at 10 a.m. Rev. Edward Zandy will officiate. Entombment will be in Calvary Cemetery, Johnson City. The family will receive friends at the McCormack Funeral Home, Monday from 4 to 6 p.m. in lieu of flowers, expressions of sympathy in John's memory may be made to the Arthritis Foundation at www.arthritis.org or to the Alzheimer's Association at www.alz.org.