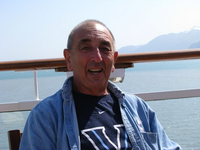 Christopher William Basile 81 passed away peacefully at his home on October 15, 2022. Chris was predeceased by his parents Amerigo and Julia Basile as well as his Southern brother CL Keene. Chris is survived by his devoted wife of 56 years Marie Renz Basile, his two loving daughters Rita (Katie) Basile, and Maria (Kevin) Humphreys, and his pride and joy his three grandchildren Maryn, Michael, and Maeve Basile. He is also survived by his brothers-in-law Frank Renz and Randy Grissom, Ben (Mary) O'Neil, and sister-in-law Dottie Renz, as well as numerous nieces, nephews, cousins, friends, and his adopted daughters. Chris was born on October 30, 1940, in Philadelphia, PA, where he was raised to be a diehard Eagles, Phillies, and Villanova Wildcats fan. He was drafted into the United States Army and served from 1964 to 1966. It was during this time he met the love of his life, Marie. Their first date was Christmas Eve Mass 1964. They were later married on May 21st, 1966. Soon after they got married he started working for IBM. In 1976 they relocated to Apalachin, NY where he continued his career with IBM. He was a computer programmer for IBM for 25 years. After retiring and while in Rochester, MN working for IBM as a consultant, God placed CL Keene, his daughter Mary Kathryn Book and their entire family into his life. From that first coffee in a Styrofoam cup, we became a lifelong family. Chris was affectionately given his southern nickname Gator for his hearty appetite! Chris was a member of the NRA, Knights of Columbus, the National Lighthouse Society, and a past active member of St. Margaret Mary's Catholic Church and most recently a member of The Church of the Holy Family. Chris dedicated most of his free time to his family from coaching soccer and teaching CCD classes, to being president of the PTA. He was a constant presence at every event in which his daughters participated. When he wasn't cheerleading for his family he enjoyed ballroom dancing, hosting dinner parties, traveling, and cruising the world with Marie and their close friends. Some of whom Chris and Marie met during their travels. We would also like to thank Chris' caregivers, especially Jody, Angel, Sadie, Jo, Maggie, and Brittany who were with him during his walk of faith. He was able to complete his journey to the Lord with Marie at his side. You all were so wonderful and words cannot express how appreciative our entire family is for your love and support. A Funeral Mass will be offered at Church of the Holy Family, 3600 Phyllis Street, Endwell, Friday at 11 a.m. Burial will be private and at the convenience of the family. The family will receive friends at the J. A. McCormack Sons Funeral Home, 141 Main Street, Binghamton, Thursday from 5 to 7 p.m. In lieu of flowers, expressions of sympathy in Christopher's memory may be made to St. John the Evangelist School, 9 Livingston Street, Binghamton, NY 13903 or to the Parkinson Foundation at www.parkinson.org.