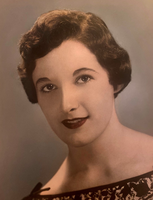 Our mother, Maureen A. (Campion) Locke passed away peacefully at her home on April 28, 2021 after a brief illness. Maureen was born December 30, 1933, the first child of the late Gerald and M. Margaret (Donovan) Campion. She was predeceased by her husband of 50 years, John Locke, Jr in 2006, her sister Patricia McGlynn, her brother-in-law Robert Locke and niece Kathleen McGlynn. Maureen is survived by her five children and their spouses, Brian (Michele) Locke, Eileen (Tracy) Miller, Mary Deraco, Jane Locke all of Binghamton and Ellen (Robert) Szczerba, Pittsburgh, PA. She is also survived by her beloved grandchildren, Matthew Locke, Zachary and Ryan Locke, Kathryn Miller and fiancé Ryan Hazen, John and James Deraco, Elizabeth (Robert) Gill, Brian and Brandon Kipp, Jennifer Kipp and fiancé Brent Jones, and Andrew Szczerba, great-grandchildren Lily, Katy and Henry Gill and Charleigh Locke. Maureen is also survived by her sisters and brother, Sheila (Terry) LaFrance, Eileen (James) Walters and Michael (Ellen) Campion, as well as brother-in-law Charles McGlynn and sister-in-law Loretta Locke. She is also survived by many cherished nieces and nephews, cousins and friends and her faithful feline companion Baxter. Maureen grew up on Robinson Street in Binghamton. She graduated from St. Paul's High School. She attended Le Moyne College and graduated from C.S. Wilson Memorial Hospital School of Nursing Class of 1954. Maureen worked as a Registered Nurse at Wilson Hospital where she met her husband John (he had a great car). They married on September 1, 1956 at St. John the Evangelist Church in Binghamton. Maureen's stories of growing up in "The Patch" and the infamous turkey event at Aunt Genevieve's house on Laurel Lake were some of our favorites. Some of Maureen's favorite times were family gatherings on Christmas Eve, family vacations in Maine and, of course, her trip to Ireland with sisters Pat and Eileen. Maureen was also an accomplished pianist, who had perfect pitch and could play any song by ear. During her early years she played the organ at St. Paul's Church. Mom, Mama, Grandma enjoyed spending time with her children and grandchildren, having a great cup of coffee, listening to her favorite music and talking about current events. Our family is blessed to have had parents that put faith and family first. That is the legacy they left us, and for that we are forever grateful! Dear Mother, God gave us memory that we might have roses in December. The family would like to thank Dr. Hong Yu of Lourdes Riverside Medical for her compassionate care of Maureen for many years. In lieu of flowers, please consider a donation to Lourdes Hospice. A Funeral Mass will be offered at the Church of Saints John and Andrew, Vestal Avenue, Binghamton, Friday May 7, 2021 at 10 a.m. Burial will be in St. Augustine's Cemetery, Silver Lake, PA. The family will receive friends at the Church of Saints John and Andrew, Friday from 9 a.m. until 10 a.m. The Mass will be livestreamed on the Saints John and Andrew Facebook page.