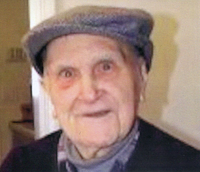 Charles J. Gustaferro, "Mr. Gus", 101 years old, of Binghamton, died peacefully February 9, 2021 after a brief illness. He was predeceased by his wife of 55 years, Carmella Gustaferro. He is survived by his children, Linda and Randy Biggs, Louie and Judy Gustaferro, Kathy and Terry Telfer, Angela and Bill Guiton and Joseph Gustaferro; his twelve grandchildren, Catherine and Angela, Lisa and Michael, Terry, Jr., Tim, Tom, Marty, Suzie, Julie, Patrick and Katie; seventeen great grandchildren, two nephews and a niece. He was a member of the Parish of Saints John and Andrew, Binghamton and a member of its Golden Age Club. He was a retired manager at the U.S. Government Depot, Hillcrest. He was a WW II U.S. Army Warrant Officer veteran, a member of the Knights of Columbus, Peter T. Campon Council, 206 and of the 4th Degree Assembly. He will be well remembered for working BINGO at the Knight's Hall. He was a member of V.F.W. Post 478 and a member of NARFE. He was retired from Sears Roebuck & Co., a former employee at the Veteran's Administration, Treasury Department, Justice Department and Immigration and Naturalization Services. A Funeral Mass will be offered at the Church of Saints John and Andrew, Vestal Avenue, Binghamton, Monday at 12 noon. Burial will be in Calvary Cemetery, Johnson City. The family will receive friends at the J.A. McCormack Sons Funeral Home, 141 Main Street, Binghamton, Sunday from 2 to 4 p.m. In lieu of flowers, expressions of sympathy may be made to St. John's Loaves and Fishes, 7 Livingston Street, Binghamton, NY 13903.