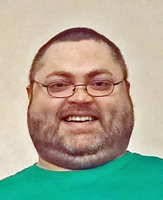 Steven Michael Colwell, 39, passed away peacefully on December 29, 2020 at his home in Binghamton, New York. Steven was born in Binghamton to Michael Colwell and Lenore Hungarter. Steven is survived by his father, Michael Colwell and his wife, his mother Lenore Hungarter, his sister April Stephens and husband Wesley Stephens, Jr., his brother Nicholas Ladouceur and fiancée Nicole Strick, as well as grandparents, several aunts and uncles, a niece, nephew and several cousins. He was predeceased by his sister Mae Colwell. Steven was an exceptionally witty, intelligent and creative man of many talents and accomplishments. He was a gifted student of the culinary arts and would frequently share his talents and creations at family parties and gatherings. His altruism, compassion and empathy for others was evident in his sponsorship of a boy from Rwanda through Compassion International and in his generous contributions and support of those in need. His love and commitment toward his beloved mother and family was limitless. In his earlier years he was an accomplished triathlete. In his spare time he enjoyed fantasy football, architectural drawing, cooking, entertaining, movie marathons and a variety of games. Steven would dominate in Trivial Pursuit, especially Star Wars and Lord of the Rings. His sense of humor was noteworthy and contagious. There was never a dull moment when he was around. He will forever live in the hearts and memories of his family and friends. He will be missed. Private funeral services will be held for immediate family at J.A. McCormack Sons Funeral Home, Binghamton. Rev. David C. Seaver will officiate. Private interment to follow at Vestal Hills Memorial Park. A Celebration of Life, for all to attend, is being planned for the spring. In lieu of flowers, please consider a donation to the charity, food bank, or foundation that means the most to you.