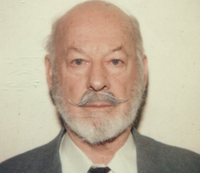 Louis F. McAuley, 96, died Wednesday, November 18, 2020 Louis was born in Travelers Rest, South Carolina to Stephen Floyd and Floree Cox McAuley. He served in the army in WWII in Italy at age 19. He studied at Mars Hill Jr. College, received his Bachelor's Degree at Oklahoma State University, and his Doctorate in Mathematics at the University of North Carolina. He was a member of the mathematics departments at the University of Maryland, the University of Wisconsin, Rutgers University, and at the State University of New York at Binghamton. He also spent time as a visitor at Louisiana State University, the Institute for Advanced Study at Princeton, and Istanbul Bilgi University in Istanbul, Turkey. At SUNY Binghamton he served as Chairman of the Department of Mathematical Sciences from 1969 -1974, and was instrumental in developing the graduate program. He directed the doctoral work of 21 students who received PhD's in Mathematics and went on to successful careers in teaching and research. He was predeceased by his parents, his first wife Ionene McAuley, his brother Van, and his sister Harriett. Louis is survived by his three sons John Devin, Louis Kirk, and Jeff Cox, their mother Patricia McAuley, and his longtime partner Kathryn Espe, as well as his niece Charlotte Poole and nephew Stephen McCall.