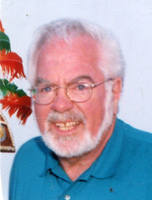 Thomas J. Hull of Binghamton, NY passed away on November 11, 2020. Tom was an Attorney in Binghamton and Whitney Point, NY for over 40 years. He graduated from the University of Notre Dame (1963, Law School 1966) and remained a devoted alumnus and Fightin' Irish fan for the rest of his days. Born December 8,1940 in Saugerties, NY, he was predeceased by his parents Martin and Beatrice (O'Roarke) Hull and beloved sister Dona O'Rourke (Jack). Tom was very active in coaching youth sports and coached teams to championships in Little League baseball and the Broome County High School Hockey Association. He coached both hockey and softball for Seton Catholic Central. He had a tremendous passion for teaching kids how to hit a baseball. He was an ever-present advocate and supporter for local professional hockey and was the bane of visiting teams. Known as "The Czar" to his fellow players, he was a founding member of the Rivermead Hockey League- where he made lasting friendships and memories. Tom was also a founding member of the Binghamton Breakfast Club. Davis Street remembers his organizing and participation in Fall touch football games, get-togethers during the holidays, and summer rides to Carvel's in his 1969 Mustang Convertible. Tom was also an avid golfer, and his quest for the perfect swing was never ending. Always thinking he was on the verge, he would often tell you on the first tee "I found it". While his handicap was never what he wanted it to be, he was a scratch at busting chops on the golf course. He was an ardent fan of the Giants, Mets, Rangers, Knicks, and Notre Dame. Tom leaves his wife Kathleen, and his children: Martin (Chris), Patrick (Courtney), Cathleen, Joseph (Diana), Andrew (Alison) Molly Fanning (Eli), Peter (Angel). Also, the mother of his children, Barbara Hull. Tom was blessed with thirteen grandchildren: Marissa, Tyler, Alexi Hull, Grace and Thomas Hull, Lily, Jack, Davis, and Anderson Hull, Jane and Samantha Fanning, and Ethan and Olivia Hull. He will be fondly remembered by his nieces- Mary (Mark) Wilsey, Kate (Craig) Lombardo, and nephews- John (Donna) O'Rourke, and Kevin (Pam) O'Rourke. Tom's step-children Patrick Greenman, Bridget (Finbarr) Scannell, and Daniel (Holly) Greenman enjoyed Tom's humor and company, as did their children- Patrick Jr, Rylie, MaryKate, Molly and Shay. Tom was a great guy who loved his Catholic faith, family and friends; he laughed a lot and enjoyed life every day. Special thanks to Kate's family: Jerry, Joanne, Gina Donahue and Judi McCarthy who gave respite care and had many visits with Tom during the last four years. A Funeral Mass will be offered at St. Thomas Aquinas Church, Highland Avenue, Binghamton, Monday at 11 a.m. Masks and social distancing will be required. Burial will be in Vestal Hills Memorial Park. Expressions of sympathy in Tom's memory may be sent to Alzheimer's Association P.O. Box 96011 Washington, DC 20090 or Catholic Charities of Broome County 232 Main St. Binghamton, NY 13905. The Mass will be livestreamed at tinyurl.com/12w5eun.