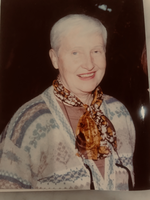 Mary Meagher Sedeuilh passed away peacefully at Good Shepherd Village in Endwell, NY at the age of 93. She was the daughter of Frederick and Jane Meagher of Binghamton,NY, and beloved sister of Fred and Jeff Meagher, Helen Oechsli and Jane Donovan. She attended Binghamton Central High School and graduated from Connecticut College in 1948. Shortly after graduating, she embarked on a life of great adventure. With reluctance, her family permitted her to go to Europe to help with WWII refugees. While stationed in Germany, she met her future husband, Dr. Maurice Sedeuilh, a Frenchman also working with war refugees. After marrying, the couple moved to the then Belgian Congo where Maurice worked for the UN's World Health Organization as a tropical disease specialist. Mary spent ten years in Africa during times of great political turbulence. Mary and her husband returned to Binghamton on a regular basis to visit family and share their many stories of life in Africa. After their years in Africa, Mary and her husband were posted by WHO to Copenhagen and lived there until Maurice's retirement. They subsequently moved to southwest France where Mary spent many happy years renovating an old French farmhouse. In retirement Mary and Maurice continued their work with refugees and spent time working in refugee camps in Southeast Asia. Mary devoted herself to learning the history, culture and language of the countries where she lived. She was a source of great inspiration to the many nieces and nephews who found their way to her doorstep. An excellent cook in the true French style, her home was always a guarantee of a special meal and worldly wisdom. She is survived by a large extended family of nieces and nephews: Carolyn Scoville, Fred and Linette Meagher, Joe and Louise Meagher, Christine and Dan Gill, Maureen and Jim Mellowes, Pat and Mike Govern, Michael Meagher and Daniel Romualdez, Bill and Ruth Meagher; Peter and Linda Donovan, Mark and Susan Donovan, Matt and Sandy Oechsli, Eileen Bohigian, Paul and Susan Oechsli, and Mary Meagher Nunez. A private Funeral Mass will be offered at St. Patrick's Church, Binghamton. Burial will be in Calvary Cemetery, Johnson City.