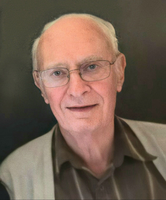 Gerald M. Tamkins "Jerry," 85, passed away Friday, October 9, 2020, peacefully at his home in Binghamton, NY. Jerry was born on February 18, 1935 at Binghamton General Hospital and grew up in Conklin, NY. After graduating from Binghamton North High School in 1952 and serving with the Army National Guard, he operated the Quality Press, the family printing business, with his brother, Paul Tamkins. His sister, Joyce, introduced Jerry to his future wife Beatrice Gill Tamkins while she and Beatrice were studying at Binghamton General Hospital School of Nursing. Jerry and Bea were married at Sts. John & Andrew in Binghamton on June 23, 1962 and remained active members of the parish for more than 60 years. They raised seven children and fostered many more. A fan of playing golf, baseball, friendly card games, and model trains, Jerry was busy watching sports, spending time in Pleasant Mount, PA and at Lake Lorain, Poyntelle, PA, enjoying the company of friends, and entertaining all with his train collection. Highly skilled at home repair, Jerry left the homes he visited working more smoothly and in better shape than they were before. Known as a man of few words, his actions and faith spoke volumes. Jerry is survived by his wife of 58 years, Beatrice "Bea" Tamkins; his children daughter Susanna Tamkins of Miami, FL; daughter Melinda Bacharach (Hal) of New York, NY; daughter Theresa Tamkins of West Orange, NJ; daughter Loretta Garcia (Michael) of Binghamton, NY; daughter Barbara Tamkins of New York, NY; son Dana McGuane (Arlene) of Albany NY; and son Damion Parmelee (Ashley) of New Hartford, NY. He was the beloved grandfather to Patrick, Jackson, Veronica, Emma, Zoe, Isaac, Eliot, Viviana, Zachary, Ezekiel, Keston, Wyatt and Truett. Also surviving him are his brother Paul Tamkins, sister Joyce Wickizer, sister-in-law M. Irene Dunbar and many nieces and nephews in the large extended Wickizer, Gill, and Dunbar families. The family would like to thank Monsignor Meagher for anointing his last sacrament and our dearest neighbors for supporting us in his transition to eternal rest. A Funeral Mass will be offered at the Church of Saints John and Andrew, Vestal Avenue, Binghamton, Tuesday at 11 a.m. Burial will be in St. James Cemetery, Pleasant Mount, PA. The family will receive friends at the Church of Saints John and Andrew, Tuesday from 10 a.m. until 11 a.m. The Mass will be streamed on the Saints John and Andrew Facebook page. Expressions of sympathy in memory of Gerald may be made to the Church of Saints John and Andrew, 7 Livingston Street, Binghamton, NY 13903.