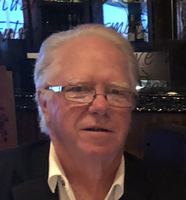 Richard H Smith, 79, of Binghamton, NY, unexpectedly passed away in the evening of Friday, September 11, 2020 at his home. He was predeceased by his father and mother, Harold and Elizabeth Smith, two brothers, Bernard and Thomas Smith, and grandson Tyler Smith. He is survived by his loving wife of 58 years, high school sweetheart Juliet Smith, Binghamton, his son Kevin D. Smith, Endicott, son and daughter-in-law Christopher Smith and Natalie Joseph, Westlake, OH, son Patrick Smith, Binghamton, daughter and son-in-law Michelle and Jake Rombold, Endwell, four grandchildren (Lauren, Cole, Nathan, and Alison), his brother and sister-in-law David and Marilyn Smith, Endicott, sister and brother-in-law Carole and Joseph Belardinelli, Vestal, sister and brother-in-law Susan Saunders and Gary Busse, Aurora, IL, brother and sister-in-law James and Marie Smith, Ilion, NY, and also many nieces and nephews. Richard, known to his family and friends as Dick, graduated from Binghamton North High School in 1960. He then attended Broome Community College, NY, and Mercer Community College, NJ, earning an Associate's Degree in mechanical drawing. He went on to become a senior mechanical designer for IBM before he joined his brother, David, in the sub-contracting glass business as co-owner of Northeastern Plate Glass Corp., Binghamton, in 1971. He spent the rest of his life working in partnership with his brother as a diligent member of the business and construction community in the Southern Tier and, at the sake of self-enrichment, committed to maintain a solvent place of employment for countless numbers of people over the ensuing five decades. Dick was a gregarious man with an unwavering sense of loyalty to his family and friends beyond compare. His generosity and compassion for others was deeply rooted. An ardent family man, he reveled in the company of his children, grandchildren, siblings and those fortunate enough to be his friends. Dick was an avid gardener and even practiced wine making. He thoroughly enjoyed time spent at hunting camp in the fall and also boating in the Thousand Islands, incidentally where he also developed signature townhomes on the mainland across from Round Island near Clayton, NY. Ever the story-teller and practical jokester, Dick was an optimist. His genuine caring and interest in others was inimitable and unparalleled. He will be sorely missed by his adoring family and friends, and all who knew him. A Funeral Mass will be offered at St. Mary of the Assumption Church, Court Street, Binghamton, Thursday at 9:30 a.m. Entombment will be in Calvary Cemetery, Johnson City. The family will receive friends at the J.A. McCormack Sons Funeral Home, 141 Main Street, Binghamton, Wednesday from 4 to 7 p.m. Expressions of sympathy in Dick's memory may be made to The Danielle House, 160 Riverside Drive, Binghamton, NY 13905. The Mass may be viewed on Zoom. The link and password information are below. https://us02web.zoom.us/j/87093986713?pwd=ajM5ZkQwTmRSeXFGK2N2eEl1bndJdz09 Meeting ID: 870 9398 6713 Passcode: 462636