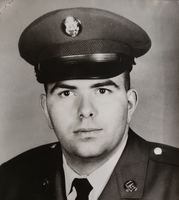 William J. Salvemini 74, devoted husband, father and grandfather passed away Wednesday September 2, 2020 at his home surrounded by his family, ending a courageous battle with Alzheimer's. He was predeceased by his mother and father Barbara and Nicholas Salvemini, his Aunts; Carmella Bean, Esther Starley and Betty Robertson. He is survived by his loving wife of 44 years, Dianne Salvemini, two daughters; Diana Salvemini and Jenny DiFulvio (Dominick), three grandchildren; Tressa Evans, Dylan Smith, Francessca Difulvio and many cousins. Bill was a graduate of Binghamton North Highschool. He was a Veteran of the Vietnam War having served for the U.S. Army. After working for IBM for 21years he retired. Bill was an avid drummer who played for many bands throughout the Southern Tier until his children were born, they became the center of his universe. Later in life he enjoyed traveling with his wife to different venues sharing his musical talents with other bands. Bill was a member of the Church of the Holy Family. He was a very gentle soul who put others ahead of himself right up until the very end, He cherished the days working on his model trains and hanging by the pool with the family. He will always be remembered for his sense of humor and his ability to light up a room with merely his presence. We wish to thank Bill's team of extraordinary home health care aides; Latasha, Tisha and Sharima who took amazing care of him so that he could remain at home. We would also like to thank Dr. John Welch, Lourdes at home, Hospice and the many others who assisted us along this journey. A Funeral Mass will offered at the Church of the Holy Family, 3600 Phyllis Street, Endwell, Tuesday at 10 a.m. Burial will be in Vestal Hills Memorial Park. The family will receive friends at the Church of the Holy Family, Tuesday from 9 to 10 a.m. In lieu of flowers, expressions of sympathy in Bill's memory may be made to The Alzheimer's Association, 441 West Kirkpatrick Street, Syracuse, NY 13204.