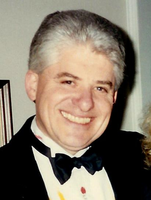 James F. Corby III, 79, passed away peacefully on June 13th with his wife and daughter by his side. Predeceased by his parents (Jane & James Corby, Jr.) and 2 sisters (Bobby McNamara & Frani Kearse) and brother-in-laws (John Costello, Kevin Keene, Patrick Kearse, Howy Sprague), he is survived by his wife, Patricia, of 54 years, daughter Jennifer (Eric Guba), grandsons (Corby & August), 2 sisters (Jennifer Keene & Mimi Sprague), brother-in-laws (Bob & Susie Costello), (Michael and Diane Costello), sister-in-law (Kathleen Costello), brother-in-law (John McNamara) and many beloved nieces and nephews. A graduate of Binghamton Central High, Boston College (BS) and Syracuse University (MS), Jimmy's favorite job was his first one as a paper boy. After driving across the country in their VW bus, Jimmy began his career at KPIX TV in San Francisco, CA. He later moved to New York City as a salesman for NBC Television. In 1976 Jimmy moved with his family back to his hometown of Binghamton, where he and his wife ran a successful executive recruiting business for the next 40 years. Jimmy was an Irish storyteller. Whether hearing for the 1st or 50th time, he engaged everyone in the room with hilarious, seemingly unbelievable, true stories of his countless escapades. It was magical. Always quick with a joke or silly prank, like his famous bag trick, he was the life of the party. He will be remembered for his exquisite sartorial style and his legendary cowboy boot collection. His love of style and beauty was evident in all aspects of his life from his first English 3 speed bicycle to his many sports cars and motorcycles to his flair for interior design. Jimmy was thrilled to be a life long member of the Lathrop Avenue Gang. His family thanks Dr. Gehring and all of the wonderful, caring staff at Willow Point Nursing Home, most especially the angels on South One. Due to COVID-19, a celebration of his life will be held at a future date.