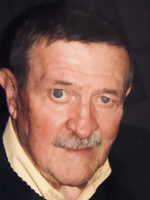 Jerry Beurket, 78, of Binghamton, NY passed away peacefully Sunday morning March 15, 2020. Jerry ended a long struggle with cancer. He was predeceased by his parents Albert and Bernice (Holland) Beurket, sisters Caroline Lawver and Mary-Jane Davis, brothers-in-law Bill Davis and Thomas O'Connor, nephew Tommy O'Connor and son-in-law John Winchester. He is survived by his loving wife Mary Margaret (Loughney), children Megan Winchester (Tom) of Median, OH, Katie Gagnon (Frank) of Montreal, QC, Christopher (Heather) of Clifton Heights, PA and Michael of Green Bay, WI. Grandchildren Kevin and Erin Winchester, Chris, Abby, and Grace Beurket, and Jennifer Gagnon. Sister Jeanne O'Connor of Sarasota, FL and brother James (Gayle) of Binghamton, and many nieces and nephews. Jerry graduated from Johnson City High School class of 1959 and University of Scranton class of 1970. He taught both at St. James and C. Fred Middle Schools in Johnson City, NY for many years. He was also the CEO of Gerald A. Beurket Income Tax Preparation Services in Binghamton, NY. He was an active member of the Johnson City Knights of Columbus, Binghamton AOH and Trout Unlimited. Jerry was a loving husband and father. He loved to read, fish, travel and visit with his children, grandchildren family and friends. He also loved attending the Saturday Morning Prayer group at St. James. He was an avid Red Sox fan. He will be missed by many. A Funeral Mass will be offered at St. James Church, Main Street, Johnson City, at a later date. Burial will be in Calvary Cemetery, Johnson City. A special thank you to the caring staff of the Mercy House of the Southern Tier. In lieu of flowers, expressions of sympathy in Jerry's memory may be made to Mercy House of the Southern Tier, 212 N. McKinley Avenue, Endicott, NY 13760 or to MDA of Rochester or the ALS Association of Cleveland.