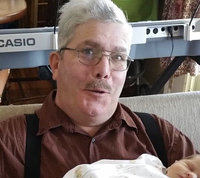 On Wednesday, February 12, 2020, Lance Corporal Joseph John Kane Jr. passed away at the age of 64. Joseph was born on March 8, 1955 at Lourdes Hospital in Binghamton New York, the second of six children, to Marie Coleman Kane, and was named after his father the late Joseph John Kane Sr. He graduated Vestal High school in 1973 and received his Associates Degree in Applied Sciences of Business and Marketing in 1988 from Broome Community College. Joe was a proud Marine, after serving his country for seven years he retired from the Marine Corp in 1987 and volunteered as an Honor Guard for many years. Joe started working at age 12 delivering the local newspaper, after his time in the Marines he returned home and served the US Postal Service until his retirement. He was a member of the Knights of Columbus's New York 4th district and worked as a counselor for the New York Association Psychiatric Rehabilitation Services. Joe never had a bad word to say about anyone – he knew life wasn't always kind but he was grateful to God and his family for always being there for him, which he tried to always do for others. Joe will be missed by his mother, Marie Coleman Kane, his sister Ann Marie Frink (Wayne), and his four brothers Michael John, Dennis (Dave), Patrick (Lisa) and Christopher (Karen) Kane – yes, their names can't get much more Irish than that. His nieces and nephews, Michaela, Jacquelyn, Thomas, Brianne, Sean, Keeley will miss him dearly. A Funeral Mass will be offered at Our Lady of Sorrows Church, 801 Main Street, Vestal, Monday at 10 a.m. Burial will be in in St. Patrick's Cemetery, Irish Hill, PA, where his father and many other family members are laid to rest, in the spring. The family will receive friends at the J.A.McCormack Sons Funeral Home, 141 Main Street, Binghamton, Sunday from 2 to 5 p.m. Joe was a lifetime member, and former commandant, of the Marine Corps League of Broome County, with this in mind and in lieu of flowers, please honor Joe by sending a donation in his name to the Marine Corps League Foundation: PO Box 1784 Binghamton, NY 13902.