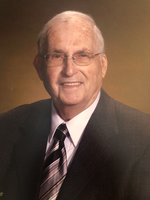 After a well lived and greatly blessed life, David Charles Lee, 90, of Binghamton passed away peacefully on February 5, 2020 surrounded by his loving family. He was born June 23, 1929, son of the late Lula (Brown) Lee and Albert Lee. He is predeceased by the love of his life, his wife Marian (Helmer) Lee, whom he shared 54 wonderful years with and his son Jeffrey Lee. He was a devoted father to his children: David (Kathleen) Lee, Deborah (Brian) Slattery, Vicki Lee, Karen (John) Wichowski, Phillip Lee (Andrew Drumheller), Suzanne Lee (Ray Robinson). He was the proud grandfather to Christopher (Kelley) Lee, Megan (Ray) Houle, Jill (Chris) Monticello, Kelly (Andy) Cortright, Kate (Trevor) Barney, Nicole (Bill) Weaver, Michael (Sarah) Wichowski, Kristen Wichowski (Connor).He adored his "little sweethearts", his great grandchildren, Erick, Emalee, Colton, Adella, Zach, Enzo, Rocco, McKenna, Mia, Kinslee and Clayton. His love grew deeper with each generation. He is also survived by his cat, Lucy and many friends who called and visited him including Norm and Luella Button, Ed, John, Joe, Andy, Grace. David was a 1951 graduate of the Albany College of Pharmacy and a member of Kappa Psi fraternity. His career began at EJ Medical and with hard work and perseverance, along with his business partner, successfully opened Park Pharmacy in Johnson City. He loved serving the community and enjoyed the wonderful relationships he made with his customers and co-workers. Later in his career he worked at several area retail pharmacies before fully retiring in 1995. Music was an important part of his life starting with the trumpet and accordion at an early age, both of which he played on local radio shows. His love of music continued with playing the organ. He and Marian, along with their dear friends Norm and Luella, enjoyed many years of traveling to organ shows and entertaining many. David spent many hours in his work shop creating wood working projects which will be treasured always. He had many hobbies including genealogy, reading, computer club, the stock market and studying the Civil war. He was a proud supporter of the Gettysburg Foundation. Being a man of strong faith, David was proud of his work with area churches including Building and Grounds Chair at Trinity Memorial Church in Binghamton and member of the vestry at Trinity and Christ Episcopal Church in Binghamton. In retirement David and Marian loved traveling, exploring different areas of the country, cruising and finally becoming "snowbirds" in their home in Bradenton, Florida for several years. David had a love for all animals, feeding any one of them that could make it to his back door. Because of this love of animals we request donations be made to Every Dogs Dream or the Humane Society. David always felt his greatest accomplishment was the family he and Marian created. He instilled strong morals and values in his children and traditions that will continue for many generations to come. He is deeply loved and will be missed always. Funeral Services will be held at St. Paul's Episcopal Church, 200 Jefferson Ave., Endicott, NY Monday at 10 a.m. Rev. John Martinichio will officiate. Burial will be in Riverhurst Cemetery, Endwell, NY. The family will receive friends at the J.A. McCormack Sons Funeral Home, 141 Main St., Binghamton, NY Sunday from 2-5 p.m. Expressions of sympathy in David's memory may be made to Every Dog's Dream, 420 Harry L. Drive, Johnson City, NY 13790 or to the Humane Society, 167 Conklin Avenue, Binghamton, NY 13903.